Once there was a little island country. The land of this country was the tiny island itself. The total money in circulation was 2 dollars as there were only two pieces of 1 dollar coins circulating around.

1) There were 3 citizens living on this island country. A owned the land. B and C each owned 1 dollar.

2) B decided to purchase the land from A for 1 dollar. So, now A and C own 1 dollar each while B owned a piece of land that is worth 1 dollar.

* The net asset of the country now = 3 dollars.

3) Now C thought that since there is only one piece of land in the country, and land is non producible asset, its value must definitely go up. So, he borrowed 1 dollar from A, and together with his own 1 dollar, he bought the land from B for 2 dollars.

4) A saw that the land he once owned has risen in value. He regretted having sold it. Luckily, he has a 1 dollar loan to C. He then borrowed 2 dollars from B and acquired the land back from C for 3 dollars. The payment is by 2 dollars cash (which he borrowed) and cancellation of the 1 dollar loan to C. As a result, A now owned a piece of land that is worth 3 dollars. But since he owed B 2 dollars, his net asset is 1 dollar.

(5) B saw that the value of land kept rising. He also wanted to own the land. So he bought the land from A for 4 dollars. The payment is by borrowing 2 dollars from C, and cancellation of his 2 dollars loan to A.

* The net asset of the country = 6 dollars; even though, the country has only one piece of land and 2 Dollars in circulation.

(6) Everybody has made money and everybody felt happy and prosperous.

(7) One day an evil wind blew, and an evil thought came to C's mind. "Hey, what if the land price stop going up, how could B repay my loan. There is only 2 dollars in circulation, and, I think after all the land that B owns is worth at most only 1 dollar, and no more."

(9) Nobody wanted to buy land anymore.

(10) So, who has stolen the 3 dollars from the country ? Of course, before the bubble burst B thought his land was worth 4 dollars. Actually, right before the collapse, the net asset of the country was 6 dollars on paper. B's net asset is still 2 dollars, his heart is palpitating.

(11) B had no choice but to declare bankruptcy. C as to relinquish his 2 dollars bad debt to B, but in return he acquired the land which is worth 1 dollar now.

There is however a redistribution of wealth.
A is the winner, B is the loser, C is lucky that he is spared.
A few points worth noting -

(1) When a bubble is building up, the debt of individuals to one another in a country is also building up.
(2) This story of the island is a closed system whereby there is no other country and hence no foreign debt. The worth of the asset can only be calculated using the island's own currency. Hence, there is no net loss.
(3) An over-damped system is assumed when the bubble burst, meaning the land's value did not go down to below 1 dollar.
(4) When the bubble burst, the fellow with cash is the winner. The fellows having the land or extending loan to others are the losers. The asset could shrink or in worst case, they go bankrupt.
(5) If there is another citizen D either holding a dollar or another piece of land but refrains from taking part in the game, he will neither win nor lose. But he will see the value of his money or land go up and down like a see saw.
(6) When the bubble was in the growing phase, everybody made money.
(7) If you are smart and know that you are living in a growing bubble, it is worthwhile to borrow money (like A ) and take part in the game. But you must know when you should change everything back to cash.
(8) As in the case of land, the above phenomenon applies to stocks as well.
(9) The actual worth of land or stocks depend largely on psychology. CTRL+C,CTRL+V
Posted by deepak Pandit at 11:14 PM No comments: 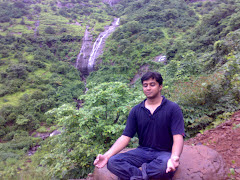